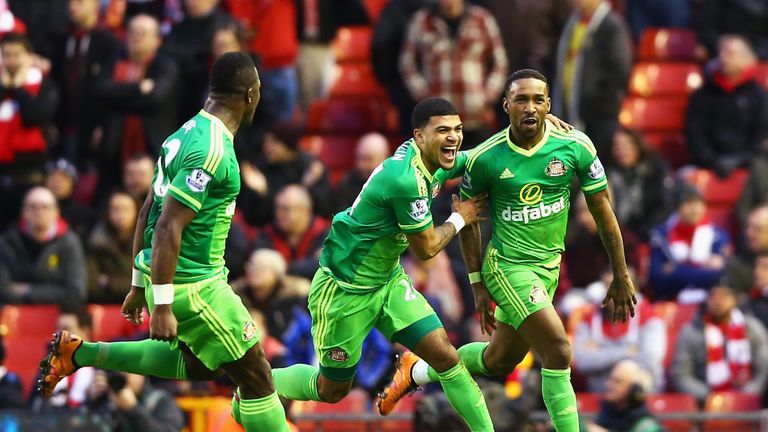 
Sunderland scored twice in the final eight minutes to snatch a 2-2 draw against a Liverpool side without ill manager Jurgen Klopp.

Roberto Firmino's header (59) and an Adam Lallana tap-in (70) had the home side coasting to a first win in four games despite Klopp's absence with suspected appendicitis.

But after many home supporters carried out a threat to walk out on 77 minutes in protest at next season's ticket prices, Sunderland conjured a comeback few could have seen coming, Adam Johnson's free-kick (82) and Jermain Defoe's strike (89) salvaging a point.

Sam Allardyce's side remain in the bottom three with a diminished four-point advantage on bottom side Aston Villa, but the manager will take heart from a result which rarely looked likely right up until the moment Defoe's goalscoring instinct made the difference.

Liverpool took an age to get going themselves in a first half interrupted by injuries to Dejan Lovren, Joe Allen and Sunderland's Duncan Watmore, and next to nothing was made of more than 80 per cent possession short of a couple of half-chances for Alberto Moreno.

Vito Mannone saved one with his legs and watched the other headed weakly over his bar, while countless crosses either failed to hit a target or were delivered into the space where a centre-forward might have been.

Liverpool played without such a specialist, although Daniel Sturridge was a surprise inclusion on the bench after more than two months out, and instead it was left to nominal No 9 Firmino to take a torpid game by the scruff of the neck with two telling contributions after half-time.

Firmino - close soon after the restart with a fizzing shot - peeled beyond the far post to head James Milner's pearler of a cross back across Mannone, and the Brazilian then hustled a mistake from Billy Jones before selflessly squaring for Lallana to find an empty net. Sunderland had missed their only chance of note moments before Liverpool's second, Patrick van Aanholt slashing into the side-netting with Defoe screaming for a pass, and with Lallana and Jordon Ibe also going close those fans who made an early exit with an audible and very visible message to the Anfield owners can scarcely have suspected they would miss a grandstand finish.


It turned out that way, though, as Moreno's needless foul on Wahbi Khazri gave Johnson the chance to fire in a low free-kick that squirmed through Simon Mignolet's unconvincing attempt at a stop.

New arrival Khazri was on the premises again when the equaliser came, finding Defoe, whose shot on the turn was away early and past Mignolet before the goalkeeper had a chance to react. At 2-0 I thought it was game over, I certainly couldn't see Sunderland getting back into it. They're going to need goals to survive and Defoe's the most likely source of them. You get the ball into him enough, he's still so dangerous.

Man of the match: Roberto Firmino